Dorres Roman SPA Baths (Les Bains de Dorres), Cerdanya plateau, Pyrenees, France
The Dorres Roman baths (Les Bains de Dorres) are located on the site of a hot spring (40 ° Celsius), which flows from the foot of the Dorres village. The picturesque village is located in the French Pyrenees at an altitude of 1450 m, on the Cerdanya plateau. This is a historic area in the Pyrenees on the border of Spain and France. In addition to alpine skiing, Cerdanya is interesting for its history, ancient small towns, landscapes and historical and geographical casus in the form of a Spanish enclave on French territory.
The plateau borders the Puigmal ridge (2,910 m high) in the south, and in the north with the Carlit ridge (2,921 m high). To the East of Cerdanya, through a valley called Tet (Têt) it borders the Mediterranean Sea. In the west – through the Segre Valley (Sègre), the plateau borders the Spanish city of La Seu D’Urgell and Andorra.
Cerdanya has a special microclimate – it experiences many sunny days at any time of the year and especially dry air. Therefore, patients with asthma, people suffering from respiratory diseases, as well as those who wish to undergo heliotherapy and who are shown treatment with thermal waters come here for rehabilitation.
The existence of baths has been proven since Roman times, as evidenced by the ancient ruins near the source. The village of Dorres is also known for the development of granite. In 1841, the first wash bowl was cut out of granite, which was used for bathing. Previously, hot sulfur water was also used to wash sheep’s wool. 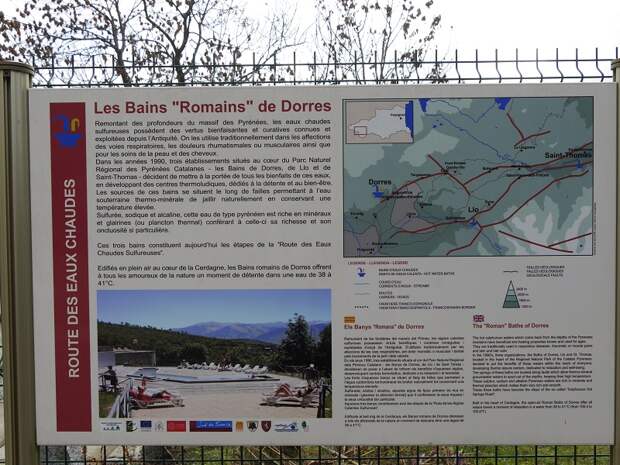