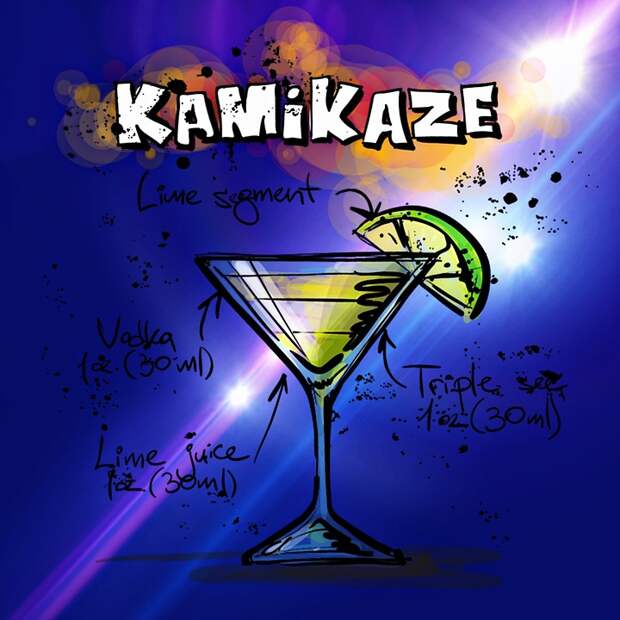 How to make “Kamikaze” – a Japanese cocktail?
“Kamikaze” is a type of Japanese cocktail, which will certainly please everyone. Despite this frightening name, this soft drink, with a pleasant taste, certainly has nothing to do with the typhoon Divine Wind, which destroyed everything in its path and earned itself such a title.
The name of the drink was given as a tribute to the Japanese suicide bombers who rammed American ships.
Immediately after the war, Kamikaze (cocktail) became the favorite drink of Americans and Europeans, from where it began its journey around the world. There is, however, another version of the origin of the drink; from a bartender in America, who believed that Kamikaze was the prototype of another drink called Gimlet.
Kamikaze is of great value among cocktail lovers.
This drink is very easy to prepare, no great knowledge is required for its preparation.
Classic cocktail “Kamikaze”:
Ingredients include squeezed orange juice (lime), orange liqueur and vodka (30 ml of each). Liquids are mixed with ice in a shaker (the bartender’s main tool). The resulting mixture is filtered into a martini glass through a strainer and a slice of lemon added.
Using the basis of the classic “Kamikaze”, other, equally pleasant and tasty cocktails are created:
Cocktail Kamikaze Lime. An easy alternative. Add 100ml of sparkling lime water to the classic cocktail. Serve in a tall glass.
Cocktail “Blue Kamikaze.” Orange liqueur is replaced by Blue Curacao. Lime juice is recommended. It creates a drink with a bright blue color and the taste does not change.
Cocktail “Electric Kamikaze”. Triple Sec liqueur is added to the Blue Kamikaze mixture. Mixed in equal quantities vodka, Blue Curacao, Triple Sec, lime (20 ml each) and ice. Then the cocktail is filtered into a chilled glass.
Read more